Published on: Tuesday, February 26, 2013 in 07:47 PM.
In the following categories: Travel notes, Journeys.
You can follow this publication throughout RSS 2.0 feed, also you can comment it.

ON HOLIDAY IN THE ARCTIC

“Where are you going to spend your seaside holiday this summer?” asked my friend while we were panting towards Mussala during our traditional annual ascent of the peak. “We are going to Khalkidhiki. They say it is terrific there. Let’s go together.”
“Well, it would’ve been possible. However, we have decided to go to the Norwegian Sea this year,” I answered.
“You are crazy! You’ll catch your death of cold there! All the Scandinavians flee to the south.”
It turned out he was right. When we landed in Oslo at midnight, the airport was overflowing with local vacationers who were craving the sun of Malaga, Antalya or Burgas, the destination of charter plane after charter plane that were taking off at this inhuman hour. 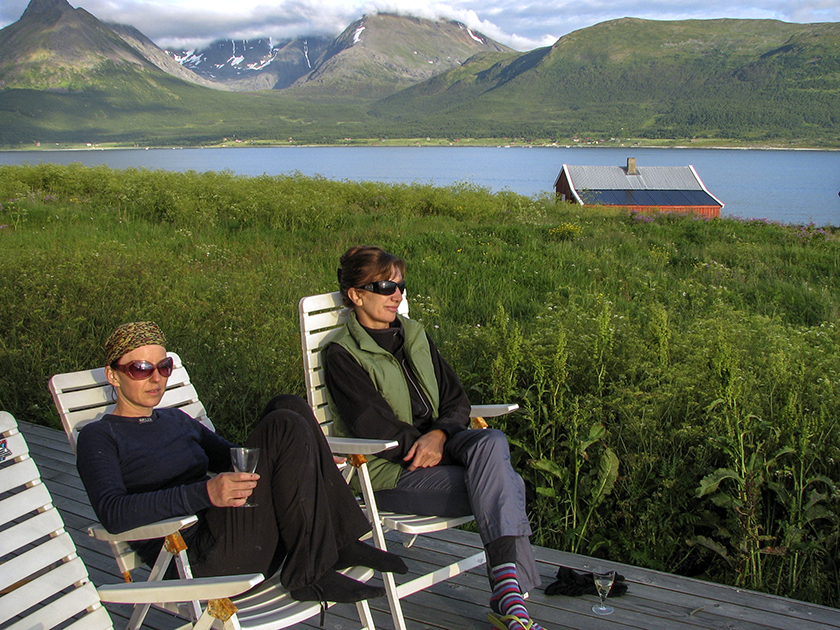 While we were waiting for the morning to come so that we could take the train to Bergen and embark on our non-standard holiday, we started chatting with a couple going to Sunny Beach. They didn’t conceal their amazement when they learned where we were going, and we didn’t either. At parting I had the feeling that each party felt some kind of malicious joy about the holiday choice of the other.
Contrary to the myth about the coldness of the Scandinavians, the Norwegians are surprisingly friendly, sociable and helpful. They are also proud and freedom-loving people in a Viking sort of way. Like Bulgaria, Norway was for centuries dominated by its neighbors, Denmark and Sweden, and fought long wars of liberation. The kingdom ultimately achieved independence on May 17, 1914.
I had planned for years to visit Norway. It was after all the native land of Edvard Grieg and Knut Hamsun, of Roald Amundsen and Fridtjof Nansen. Besides, this country that is as beautiful as on a poster takes pride in its vast areas of virgin nature and rightfully claims to be one of the last spots in present day Europe that is not spoiled by industrial civilization. This doesn’t hinder the descendants of the medieval Vikings from having an exceptionally well-arranged modern country with one of the highest standards of living in the world. In the year 2000 the Gross National Product of Norway amounted to 134 billion dollars, or 30,100 dollars per capita.
Thanks to the considerable oil fields discovered in the North Sea at the end of the 1960s, the small nation of only 4,5 million inhabitants, whose main means of livelihood in the past were fishing and lumbering, hit a real jackpot. Today 30 percent of the GNP comes from oil. As a result the economy flourishes; new branches of industry have expanded, like shipbuilding, metalworking and fishing. The prosperity of the population increases in a geometrical progression and the Norwegians have received the telling byname “the blue-eyed sheikhs.” 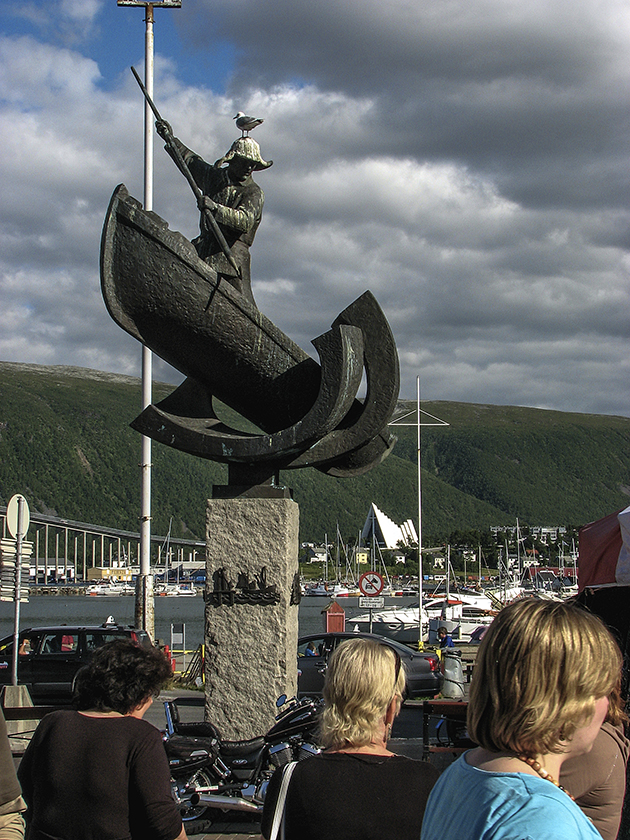 In contrast to the Near East, however, Norway is far more abundant and varied. The moment we left the suburbs of Oslo different scenery like on post cards started appearing along the railway line: mighty pine forests with pearly lakes glittering among them, rocky gorges and foamy cascades, mountains with glaciers, and here and there small villages as if lifted out of fairy tales. I don’t know if the road between Oslo and Bergen is really one of the most picturesque in Europe as the tourist brochures assert, but in any case it passes through an absolutely non-cultivated piece of Europe’s geography. Factories, farms, power stations—that is to say industry that accompanies you when you travel in Germany or Poland, for example–are totally missing here. The Norwegians are great nature lovers and take maximum advantage of this situation—there is literally no family that doesn’t go skiing, doesn’t sail a boat or climb mountains.
My friend Dag Oyvind is from Bergen. When I wrote to him that I was planning a tour of Norway, he answered: “You have to come at any cost to our summerhouse in Hawkaya—the Hawk island.” I assumed that he was talking about a pastoral place somewhere in the warm fiords to the south of Bergen, but taking a look at the attached map I found out that Dag Oyvind and his girl friend intended to spend their holiday at more than 70 degrees northern latitude! This meant—at the northernmost end of Europe. Additional research showed that the island is uninhabited (no surprise bearing in mind that the average density is only 12 people per square kilometer), devoid of any kind of communication and situated 2500 kilometers to the north of Bergen. If we wanted to travel by boat, we would have reached it in five days. However, we wished to see something besides fiords and fishing villages, and that’s why we decided to travel by land as well as by sea. We settled on meeting at an appointed day and time in Tromsø, the last sizable inhabited place before the North Pole.
Tromsø is famous for its fish and beer. The fish—it was understandable. But we didn’t know that the northernmost brewery in the world was located exactly here. Right after we set foot in the harbour, Dag Oyvind and Ranghild invited us to taste the local beer. Then we went shopping for provisions. As in any civilized country this isn’t a problem here, but in contrast to even less civilized countries it is a rather complicated undertaking to buy alcohol in Norway. You need to be prompt, inventive and mostly lucky. Especially on a Saturday afternoon! And if you have the bad fortune to look for alcohol on Sunday, you’ll have to accept the fact that the day will be dry.
God only knows why Norway has such a double-faced attitude towards alcohol. The sale of alcohol is a state monopoly and is carried out in special shops called “Vinmonopolet,” which are as sought after, craved for and rare as the dollar-shops in Bulgaria in the old days. On the other hand, don’t be under the delusion that Norwegians don’t like drinking—on the contrary, in spite of the perversely high prices, they do. A bottle of cheap wine costs 10-12 euro, a bottle of beer—4 euro, and vodka and whisky—25!
In Tromsø there was only one “Vinmonopolet” with opening times from 9 am to 5 pm on weekdays and from 9 am to 2 pm on Saturdays. We were inventive and fast enough to discover the shop at lightning speed, but we had no luck. It was Saturday and long after 2 pm, so we had to content ourselves with the local beer, “Mac”. 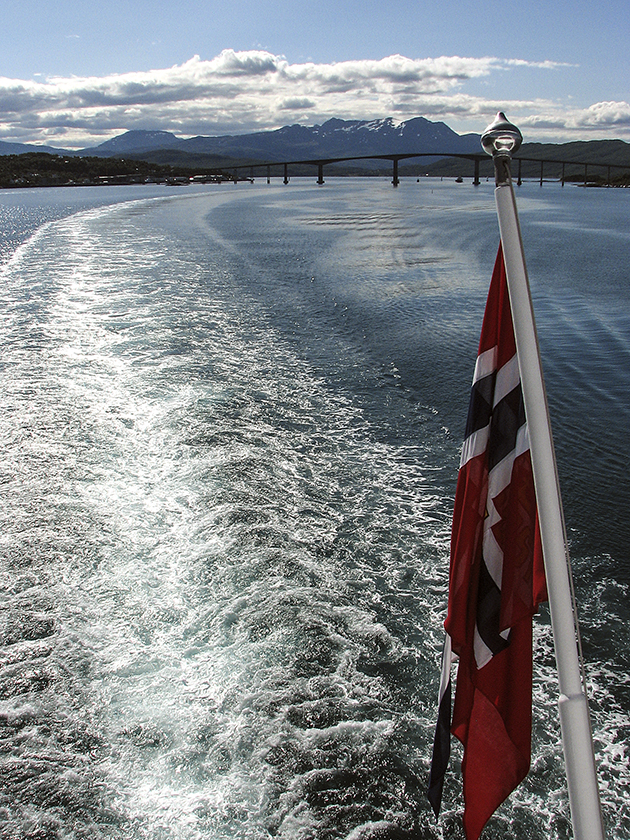 It must have been around midnight when we arrived at the endpoint of our sail—the fishing village Sherway—but you couldn’t possibly guess the exact time. Outside was as light as during the day. As a result of the whim of astronomy, the sun never sets in these high latitudes in summer, more precisely between May 16 and July 26. Which is a little bit unnerving for the people from “down below” and leads to a strange hyperactivity as well as to confusion in the habitual biological rhythm. We usually went to bed at 2 or 3 in the morning and woke up at the normal time, feeling fresh and rested. It’s interesting to think what happens during the Arctic night when the sun doesn’t rise for months on end. Then you probably can’t get out of bed at all.
In Sherway, Dag Oyvind went looking for his father’s motorboat that was supposed to take us to the polar summerhouse on Hawk Island some fifteen kilometers away from here. After he found it, we all got on. It was a delicate boat but the sea was calm and the sailing under the leaden rainy sky didn’t take long. At one moment the midnight sun tore the clouds and coloured the waves in polar warm orange. Dag Oyvind switched off the engine and we stared spellbound at the horizon like a bunch of pagans. We were at the northernmost point of the continent, and we couldn’t but think of the fact that the land ended just behind us and that from here to the north, to Alaska, there was nothing except sea and ice.
When we approached the leeward side of the island the hosts said that we had to cast the fishing lines to secure our dinner. As it turned out, the invariable menu when on holiday in Hawkaya is fish and fish again: fried, steamed, roasted, boiled, smoked, salted … till one is sick and tired of it. And these waters abound in fish. You catch it without a rod nor bait—just with a line and a lure. At the second or third casting, Dag Oyvind pulled a three-kilogram codfish out of the water. In the meantime we had caught several smaller ones but we returned them to the water to grow.
When we arrived in the bay of the summerhouse, we dropped anchor and with a rowboat went to the shore, then walked to the small wooden two-story house. There was no electricity there but we didn’t need it actually with this eternal light. With several deft movements, Dag Oyvind scaled and filleted the fish—as he was to do every day over the next ten days—and Ranghild switched on the gas-cooker and fried it.
Warmly dressed (because day and night the air temperature was about 10 degrees Celsius) we sat on the wooden veranda and watched the nightly day. Sea mists came unnoticed from somewhere, settled on the black rocks opposite us but soon left without changing the polar twilight. I noticed that neither Dag Oyvind, nor Ranghild were wearing watches. Two days later I also forgot to put on mine. There was no need of the dial in this Arctic timelessness…
Good that we at least kept an eye on the calendar so that we didn’t miss the day of our departure. Dag Oyvind and Ranghild decided to come with us in order to continue their holiday in Bulgaria. Although the northern sun shines non-stop throughout the summer, for them it wasn’t obvious enough. And we… we already missed it.

One Response so far